Glan is one of the oldest town of South Central Mindanao.  GLAN was the name called for the entire East side of Sarangani and including General Santos City.  General Santos City formerly named as “Dadiangas” or “Rajah Buayan” was just a barrio of the huge town of Glan. It was in 1914, that settlers from the Visayas bravely occupied and tilled the soils of Glan.

A hundred years later, Glan is now a progressing town of Sarangani Province.  It is the Coconut Queen of the South with thousands of hectares of rolling Coconut tree hills.  Coconut is the main agricultural product and economic activity of Glan. Its next  biggest attraction is the beautiful, pristine, white sand beach of Gumasa.  Yearly the awarded Sarangani Bay Festival event (also known as the Biggest Beach Festival of Mindanao) is hosted in Gumasa. Thousands flock to join the different sports activities and to enjoy the beach.

If you wish to take a tour in Glan, you can make your reservations with Go Sarangani Travel.  Here are the list of the upcoming events coming this September 23- October 8.

Glan will only turn 100 once, so witness its turning of a century! 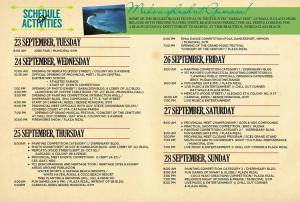 We specialize on tours around General Santos City, Sarangani, Lake Sebu and South Cotabato. We are your premier SOX Tour Provider!